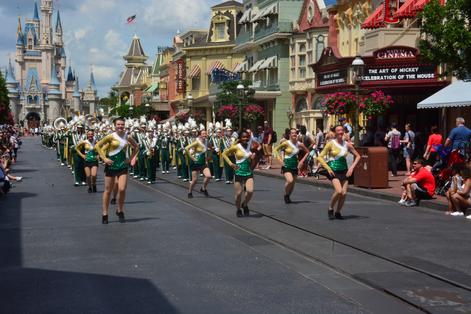 The GlenOak Band Program is a highly comprehensive program that aims to provide students with an incomparable high school band experience. We offer students group experiences in concert, jazz, and marching with an emphasis on the individual instrumental musician. Band ensembles for credit at GlenOak include:

Other non-credit extra-curricular opportunities include:

Both the Concert Band and Symphonic Winds consistently earn Superior ratings each year at OMEA District and State Large Group Contest. Students participating in OMEA Solo and Ensemble in the Winter earn the highest ratings as well. In 2018, the Symphonic Winds performed at the Ohio Band Directors Conference.

The GlenOak Jazz bands yearly are invited to perform at a variety of jazz festivals locally and nationally. We host the Plain Local Jazz Festival every March which has featured guest artists like Sarah Morrow, Ernie Krivda, Jim Rupp, Michael Parkinson, Matthew James, Scott Garlock, Dave Banks Big Band, Ohio University  Jazz I, University of Akron Jazz, KSU Jazz Ensemble, and many others.  GlenOak Jazz I was featured with the Canton Symphony in December 2016 in a Swingin' Holiday concert.

Chris Irwin
Chris is in his fourteenth year as Director of Bands at GlenOak High School. He is a 1999 graduate of Ohio University where he earned a Bachelor of Music degree in Instrumental Music and a Master of Music degree from OU in 2003. He began his career in 1999 as an Assistant Band Director at Logan High School before returning to Ohio University as a Graduate Assistant in the Band Department while completing his Master's degree. In 2003, Mr. Irwin was hired as the Director of Bands in the Kent City Schools where he directed the Kent Roosevelt Marching Band, Jazz Band, Pep Band, and Wind Symphony along with serving as Instrumental Music Department Chair. He joined the instrumental staff at Plain Local in 2005 as Director of Bands at GlenOak High School and assists in teaching band in grades 5-8. He currently teaches Jazz I, Symphonic Winds, Music Theory and History, International Baccalaureate Music, Marching Band, and Fifth Grade Beginning Brass at Glenwood Intermediate School.

Kelsey Giotta
Mrs. Giotta teaches 8th grade band at Oakwood and the GlenOak Concert and Marching Band. Her bands at Oakwood Middle School have earned Superior Ratings in Class A, B, and C. She is a 2011 Graduate of the Cincinnati Conservatory of Music where she earned a Bachelor of Music Education as a French Horn player. Mrs. Giotta currently serves at the OMEA District 8 Treasurer, and is working on her Masters in Music Education through Case Western University. She has served as the state President-Elect and President of the Ohio Collegiate Music Education Association during her undergraduate studies at CCM. She recently presented a clinic at the OMEA State Professional Conference.

Elyse Laux
Mrs. Laux currently teaches 7th Grade Band at Oakwood, GlenOak Jazz II, assists with the GlenOak Concert and Marching Bands in addition to also instructing Fifth Grade beginning Percussion at Glenwood. She began her career as the Assistant Director of Bands at Lancaster High School in Lancaster, Ohio, where she taught beginning woodwinds, Concert Band, Jazz Band, Pep Band, and General Music grades K-5.  She is a 2011 graduate of The Ohio State University, completing her Bachelor of Music Education degree Cum Laude playing the saxophone. Mrs. Laux is currently working on completing her Masters Degree in Music Education at Ohio University. She currently serves as an OMEA adjudicator, and was featured as a clinician at the 2016 OMEA State Professional Development Conference in Cincinnati, Ohio.